SQL stands for Structured Query Language and is pronounced either ess-que-el orsequel. It is the language used by relational database management systems (RDBMS) to access and manipulate data and to create, structure and destroy databases and database objects.

IBM invented a computer language back in the 1970s designed specifically for database queries called SEQUEL, which stood for Structured English Query Language. IBM released SEQUEL into the public domain, where it became known as SQL.

Because of this heritage you can pronounce it as “sequel” or spell it out as “S-Q-L” when talking about it.

What Is a Database? 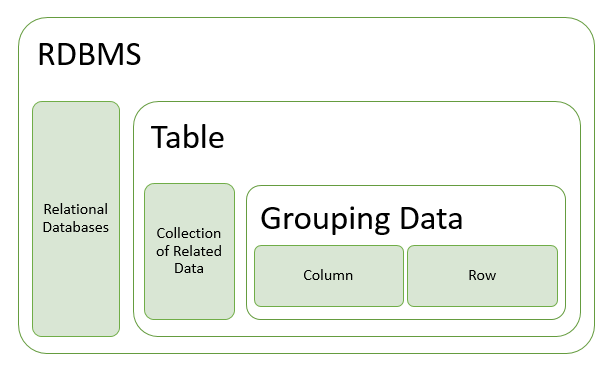 Interview with the Customer:

A good database design starts with a thorough understanding of the situation and desired outcome of the customer. That’s why the people who design new systems are called analysts—they analyze the problem in detail and try to think of ways to solve the problem.

Sometimes an old-fashioned interview is the best way to find out exactly what the customer wants, especially if you don’t fully understand what the current situation is and what the goal is.

Use questions like these to probe for your customer’s needs:

By asking these kinds of questions you can quickly build a sense of why a database is needed. Although you might not be able to provide everything (given the limitations of the assigned budget, time frame, and hardware allowances), you will have the start of a long-term plan for growth and expansion of the database.

After the interview (you did take good notes didn’t you?) it is best to brainstorm about possible objects, including their names, types, and lengths. After the objects have been decided on, you can group them into related tables.

SQL Server supports several different data types, including those for characters, numbers, dates, and money. More detail on data types is provided on Day 9, “Creating Tables.” After you have decided on your tables, specify the properties (columns) within these tables. Keep column names simple yet descriptive.

Column lengths should satisfy all but the most extreme cases. When dealing with names, your limitation might be how many characters can fit onto a mailing label—not how many to store.

Now that you have decided on the columns, you must organize the data into related tables, which is referred to as normalizing the data.

Normalization is the process of organizing data into related tables. By normalizing the data you are attempting to eliminate redundant data.

There are rules established for the normalization of data. These rules are known as